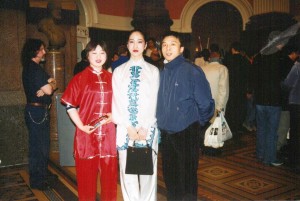 Performers and fan before the show

In 2002, Ms-L invited one of the top Wushu teams—– Tianjin Wushu team to demonstrate their skills in 14 cities in Wales and England: Birmingham, Portsmouth, Southampton, Preston, Nottingham, Blackpool, Bristol, Leeds, Brighton, Newport, Brecon, Rhyl, and Aberystwyth.
The team was entirely made up of national youth champions while their senior instructor Wu Bin also coached the martial arts film star Jet Li. These youngsters showed off more the 40 types of fights, with and without weapons.

The shows were well welcomed by audience, especially to majority non Wushu practitioners. They were so surprised to find out that the content of Chinese Wushu is much richer and its movements are more artistic than they expected. They expressed they would like to watch more of this in future. A quite number of youngsters came to talk to our performers and asked if they could teach them Wushu. In Nottingham, one of our Tai Chi actors was held hands tightly by an old gentlemen who shined tears in his eyes, he was very excited by the show, he commented it was the most wonderful shows he had ever seen.