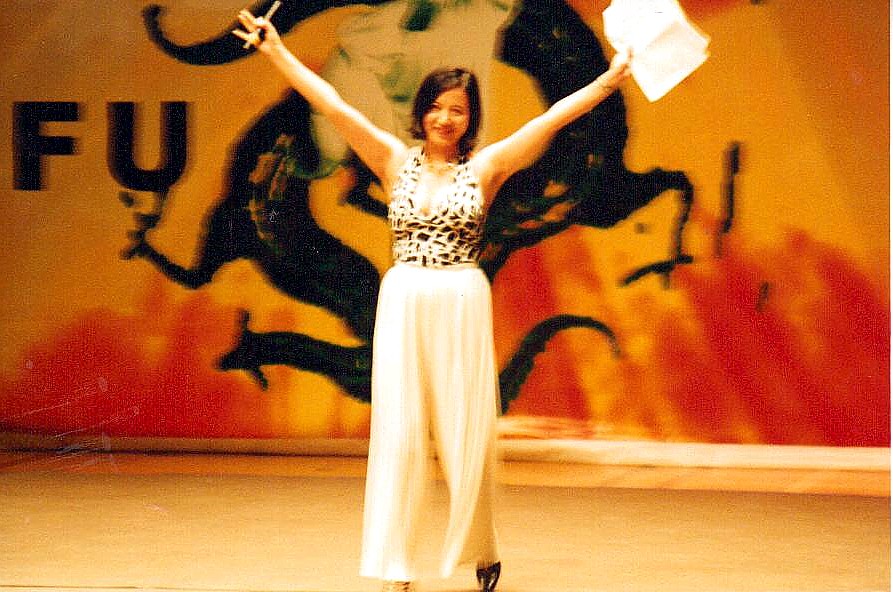 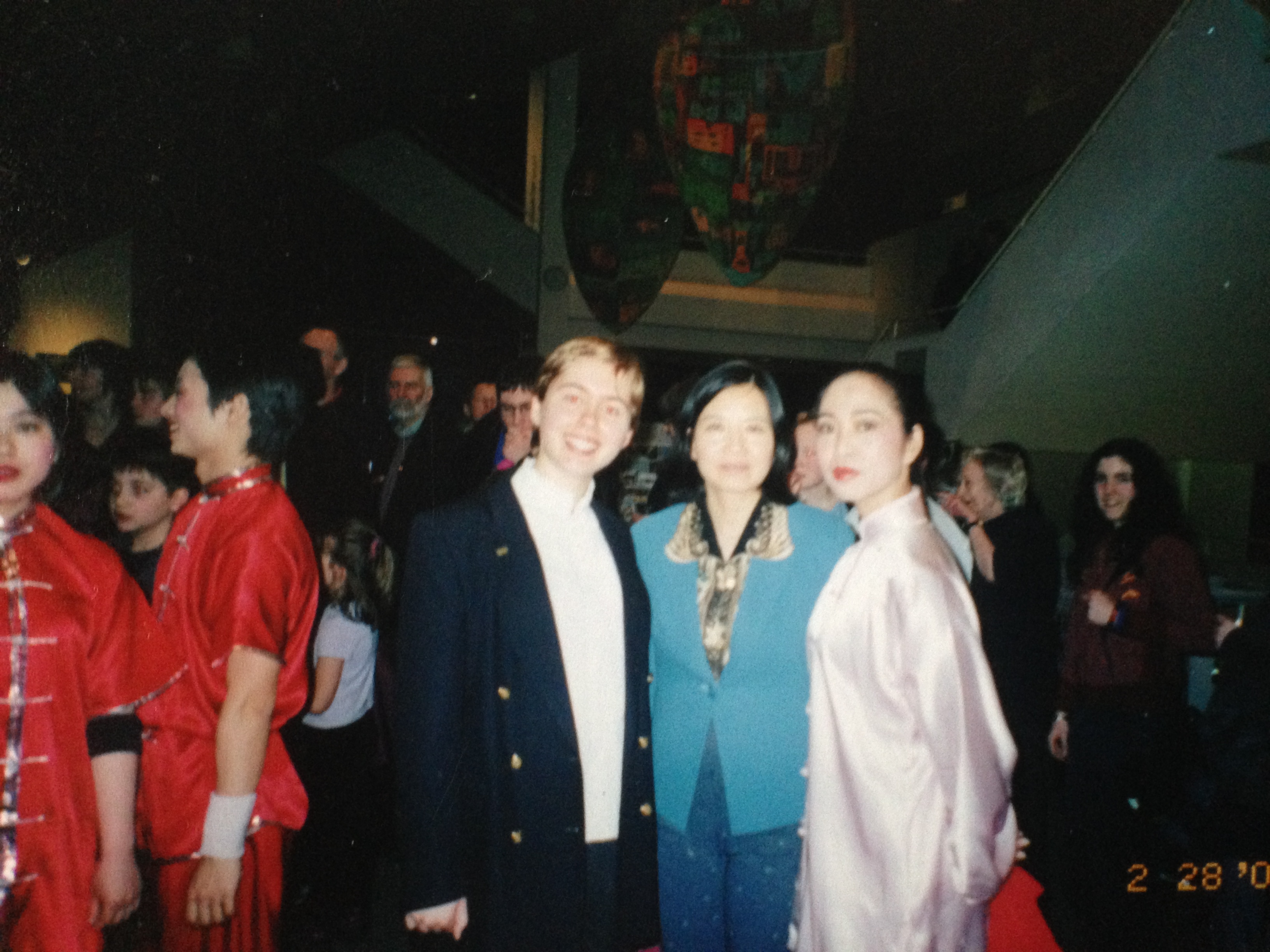 A Chinese martial arts team is heading for Wales to show-off their elaborate fighting skills. Dressed in red robes and armed with metre-long sticks, a dozen Chinese fighters fly through the air and land on a sea of blue mats with cat like agility. Battle commences and audiences look on in wonder as the young men and women carry out breathtaking leaps twists and air-kicks. This is not your usual theatre fare. But production teams have finally realised the fascination eastern traditions hold. Their elaborate dress, exotic music and age old skills, have finally put Chinese arts in demand. 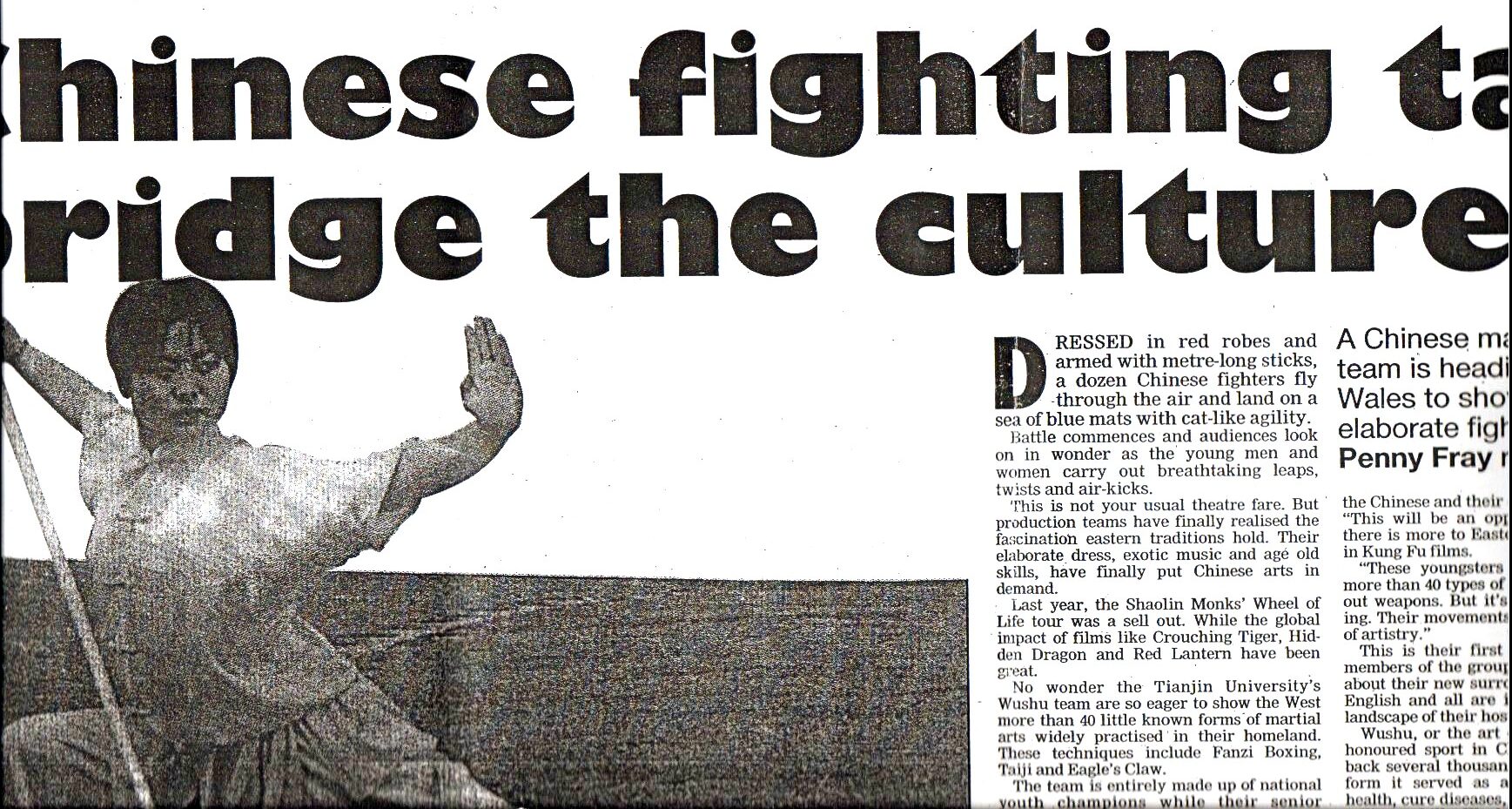 Last year, the Shaolin Monks’ wheel of life tour was a sell out . While the global impact of films like Crouching tiger hidden dragon and Red lantern have been great. No wonder the Tianjin University’s Wushu team are so eager to show the West more than 40 little known forms of martial arts widely practiced in their homeland. These techniques include Fanzi Boxing,TaiJi and Eagles Claw. The team is entirely made up of national youth champtions while their senior instructor, Wu Bin also coaches Hollywood’s latest martial arts film star Jet Li.

Bought over to Wales by local impresario Liu Li Wood, they are about to embark on a 14 date tour, visiting Rhyl’s pavilion Theatre on February 25 and Aberystwyth’s Art center on the 27th. After years of studying and living in Britain, the arts promoter feels that aspects of Chinese culture remain a mystery. She is confident that such shows as Wushu will appeal to the public because of the performers unique skills.

“Not many people in Wales know about the Chinese and their culture” says Liu Li, “This will be an opportunity to see that there is more to Eastern martial arts than what you see in Kung Fu films. These youngsters will be showing off more than 40 types of fighting styles both with and without weapons. But it’s not all about attacking. Their movements are graceful and full of artistry”. This is their first time in Britain and members of the group are rapidly learning about their new surroundings. Some speak English and all are interested in the rich landscape of their host country.

Wushu, or the art of fighting, is a time honoured sport in China which stretches back several thousand years. In its earliest form it served as a means to build up health, cure diseases, prolong life and train military skills. Wushu has since developed into a unique combination of self-discipline and skill forms such as kicking , chopping and throwing. According to Liu li, it involves practice with weapons as well as standard bare hand fighting. Weaponry includes nine kinds of long arms and nine short, such as knives, spears, swords and clubs, which constitute the 18 types of martial arts. In marked contrast, the university team also demonstrate the Taiji Quan exercises which are used for healing illnesses and strengthening the constitution. Over the past three centuries, the popularity of the Taiji Quan (commonly know in the West as Tai-Chi) has increased and spread far beyond China’s borders to South East Asia, Japan, Europe and America. Despite the seemingly effortless fluidity of movement, the practice can be quite physically demanding. They have also incorporated traditional stories into the show, to keep audiences interest as the martial demonstrations are staged.

Liu Li, who used to be a martial arts practitioner herself, realising that she could not make the professional grade, she decided to focus her attention on the arts instead. “When I was growing up in Kunming, south China, Wushu was a popular activity,” she explains. “Almost every child I knew would practice in the local parks after school due to the Emperors decree.” Since the founding of the Peoples republic of China Wushu has become part of the socialist culture and individuals physical education and sports has developed spectacularly. Statistics show there are more than 100 schools of Chinese Boxing alone. And with competition in the field so great , only the creme de la creme go on to win awards and appear on the international stage. “ Although I was better than average I wasn’t good enough to make the grade. I went on to an acdemic path  study”. Liu Li  is eager to utilise her bilingual skills to do something to bridge the gap between western and eastern cultures. “ This is such an ideal job for me” she says “ I feel at home in the theatrical arena, having spent most of my spare time acting and directing in the past. “I believe that art has no borders. The exchange of art and culture is the best way to bridge the gaps and promote appreciation and love between nations” 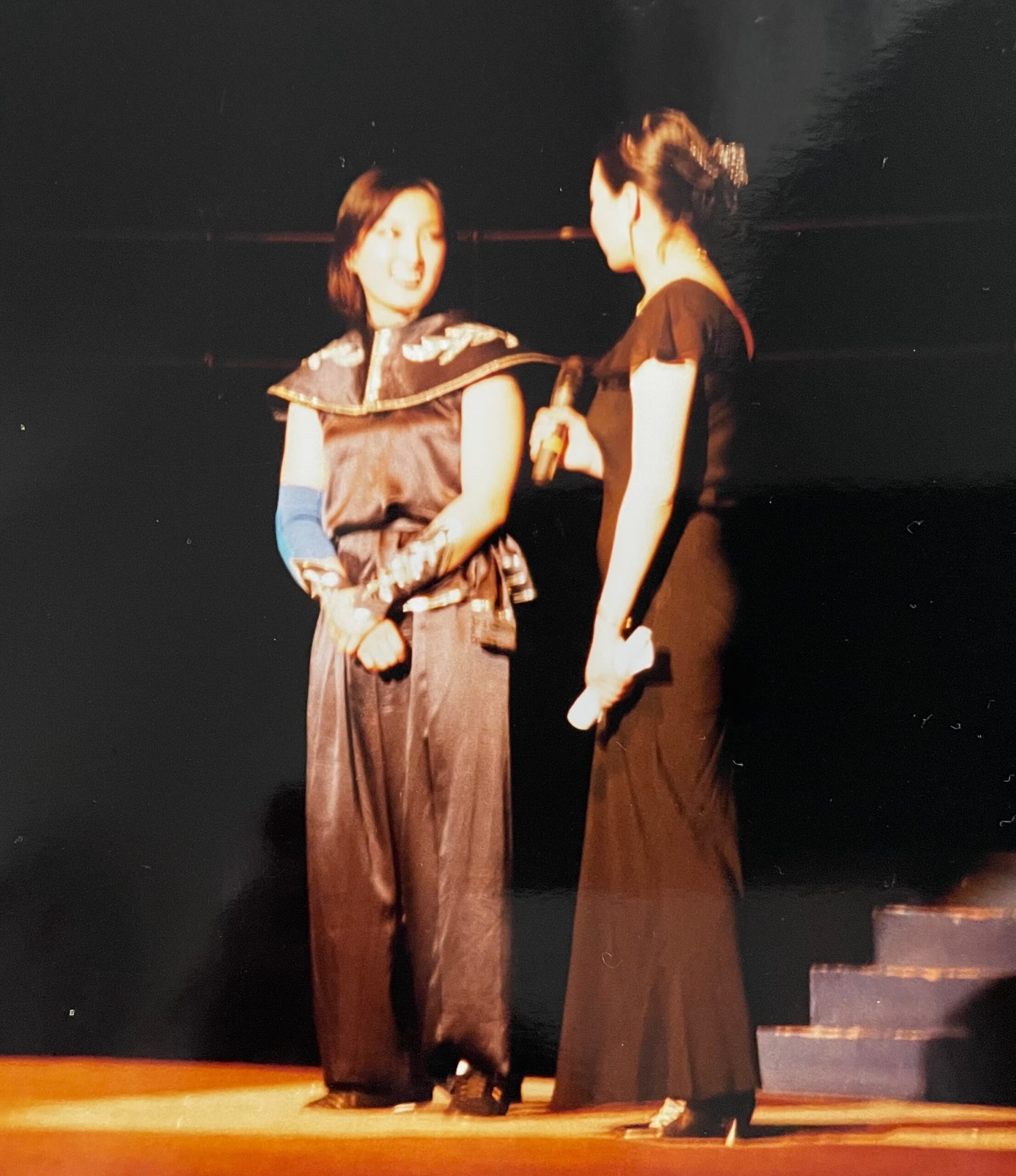 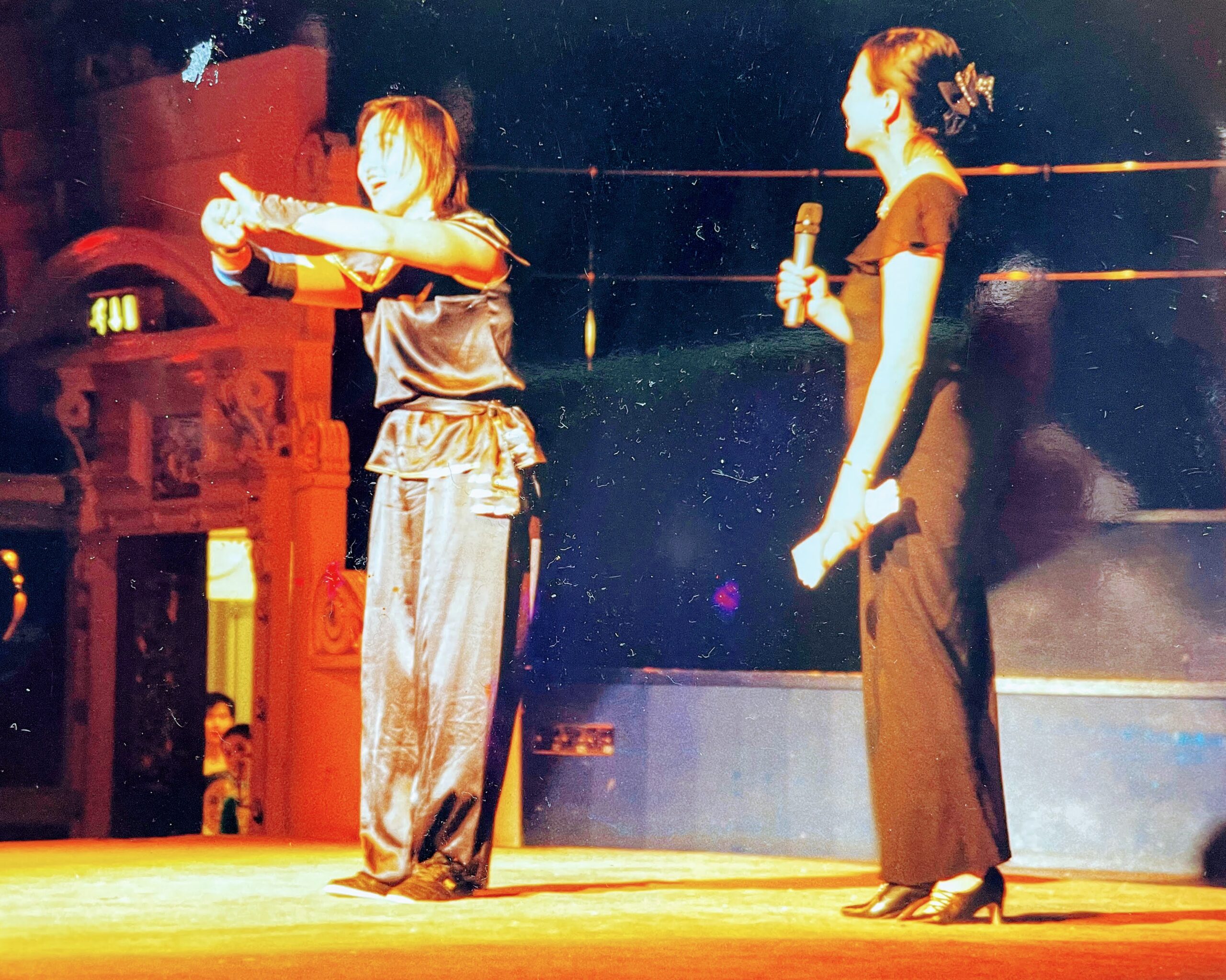 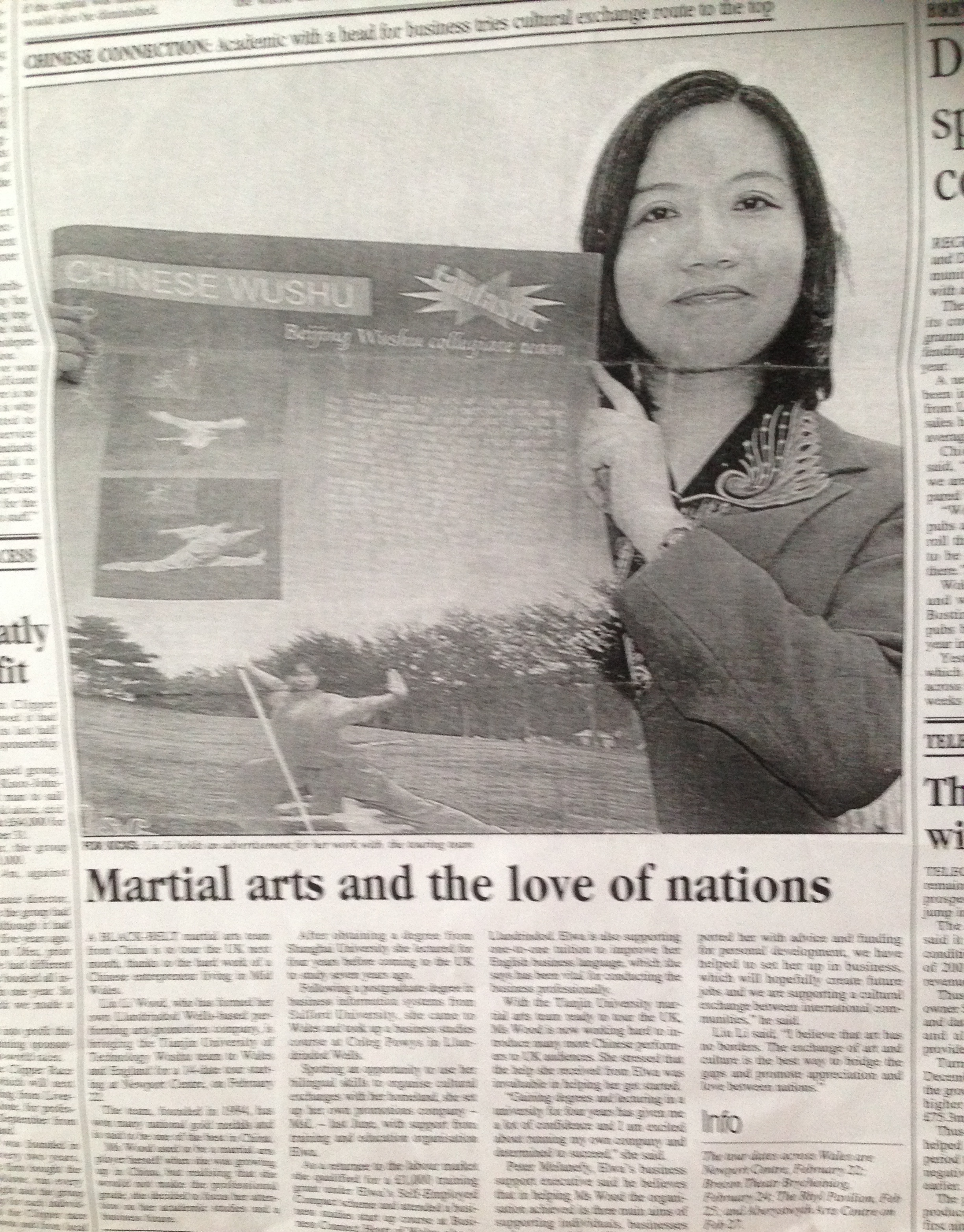 A BLACK-BELT martial arts team from China is to tour the UK, thanks to a Chinese entrepreneur Liu Li, who has formed her own Llandrindod Wells-based performing arts promotion company, is bringing the TianJin university of technology  Wushu team to Wales and England for a 14 venues tour.

Ms Wood used to be a martial arts practitioner herself when she was growing up in China, but realising that she would not make the professional grade, she decided to focus her attention on her academic studies and her business future.  Spotting an opportunity to use yer bilingual skills to organise cultural exchanges with her homeland, she set up her own promotions company – MsL , with support from training and education organisation Elwa.  As a returned to the labour market she qualified for a £2000 training grant under ELWA’s self-employed Compact scheme and attended business studies start-up course at business Connect Heart of Wales, also in Llandrindod. Elwa is also supporting one -to -one tuition to improve her English business language, which she says has been vital for conducting the business professionally. With the Tianjin university martial arts team ready to tour the UK, Ms Wood is now working hard to introduce many more Chinese performers to UK audiences.  She stressed that the help she received from Elwa was invaluable in helping her get started.

Peter Melanefy, Elwa’s business support executive said he believes that in helping Ms Wood the organisation achieved its three main aims of supporting individuals, business and communities. “We have supported her with advice and funding for personal development, we have helped to set her up in a business, which will hopefully create future jobs and we are supporting a cultural exchange between international communities,” he said.