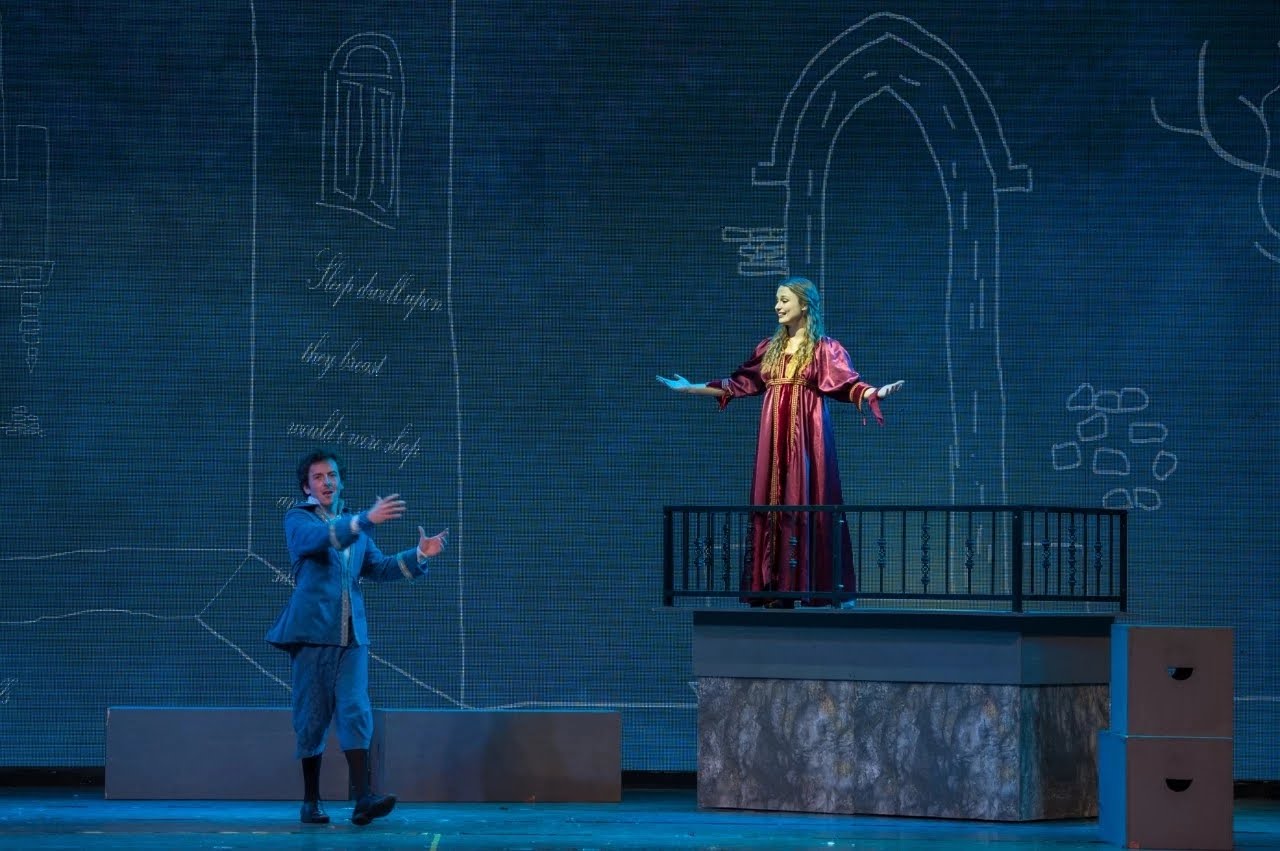 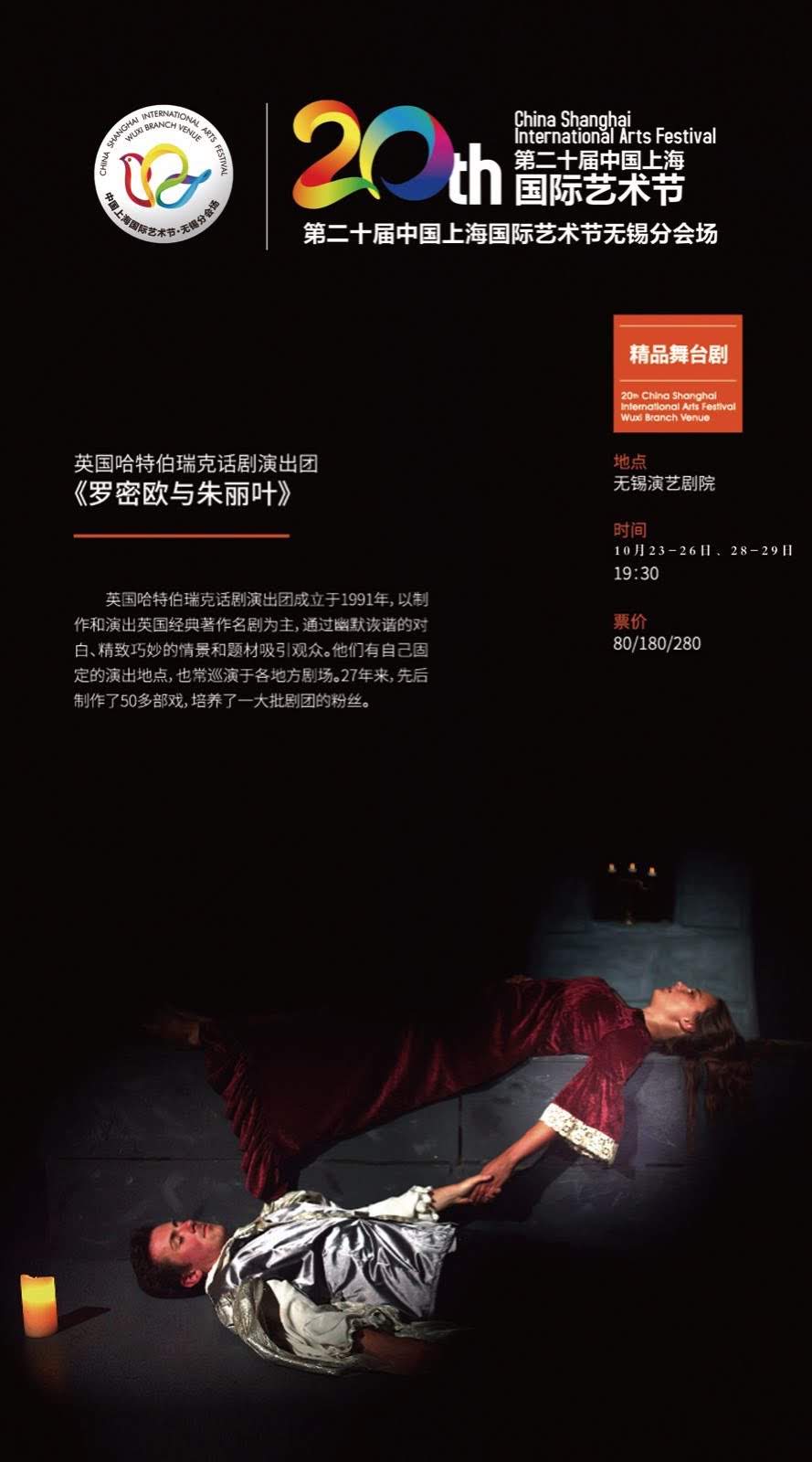 This performance in particular reflects the distinctive characteristics of the theatre company. Heartbreak Productions was founded in 1991 it is renowned for bringing modern theatrical techniques,  humour and sensibility to English classics.

The props are simple but practical, the backdrop mainly sketches the scenes through simple lines, which are nevertheless lively and full of English humour.  The stripped-back performance keeps essential roles and simplifies the story, though this may reduce the depth of character portrayals the essential elements are magnified and made even more memorable. 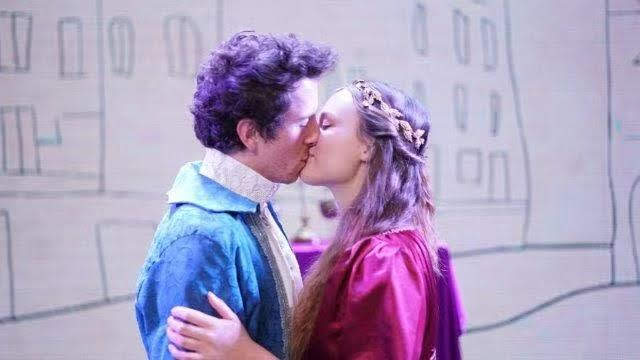 The production cleverly employs illustrative actions to replace some of the longer conversations, this works especially well for overseas audiences, who may have a limited understanding of the English language.

It is worth mentioning that the show is very witty and filled with humorous moments, in addition, the stage fighting is truly awesome and the acting top-notch, each character is played fantastically to the details. For example, Juliet’s innocence and cuteness, and  Mercutio’s playboy style, Tybalt’s belligerence … etc all really come across well.  In the fighting scenes,  the actors use metal swords and the fighting is intense, fierce and gripping. 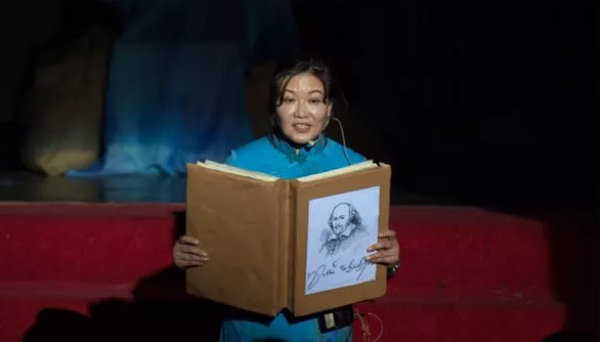 The implementation of a narrator also really helps the audience to follow the story easily.

In all, this show was very enjoyable and catered to all families, it offers a rare chance to have a taste of Shakespeare’s works in China. 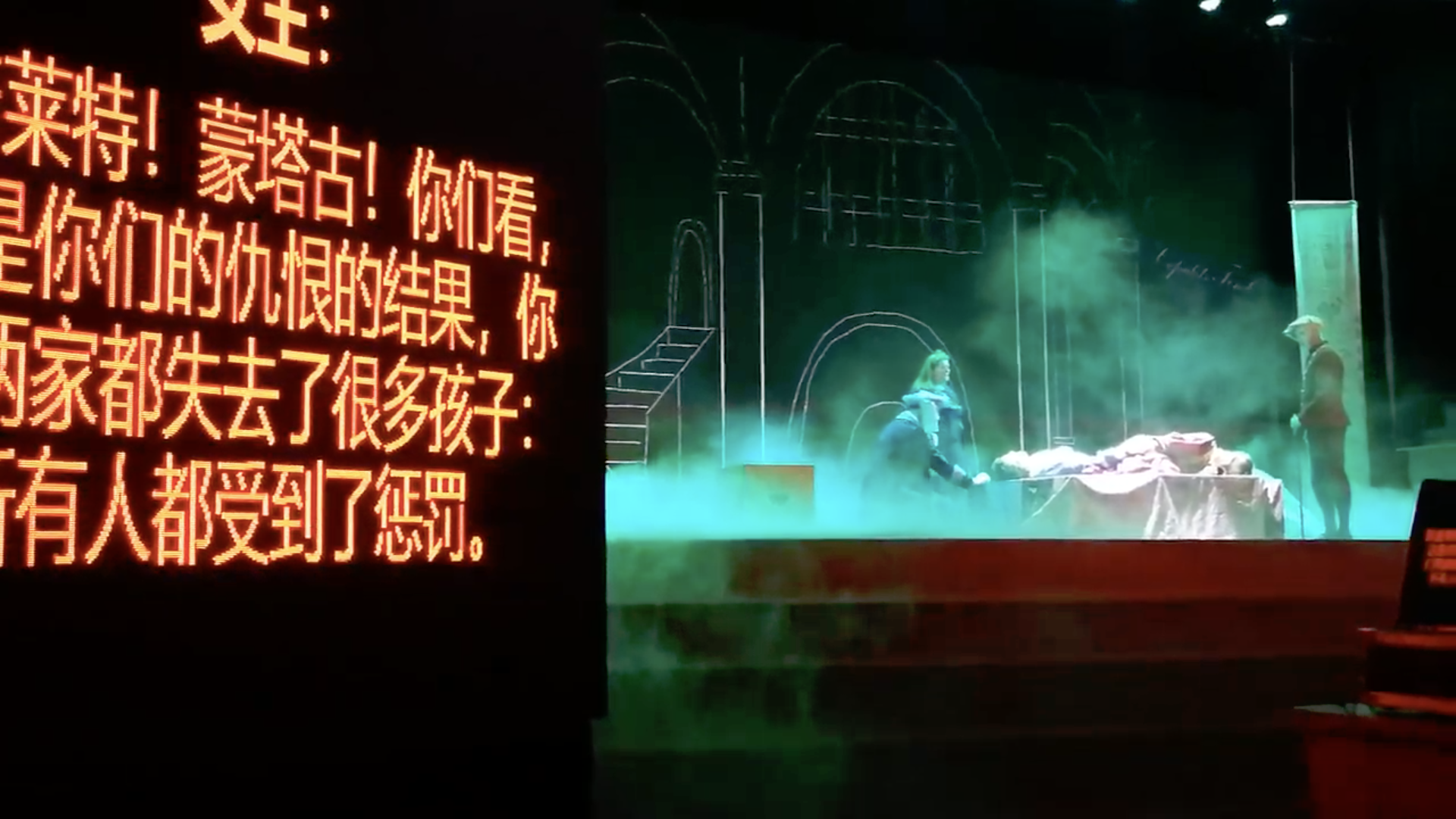 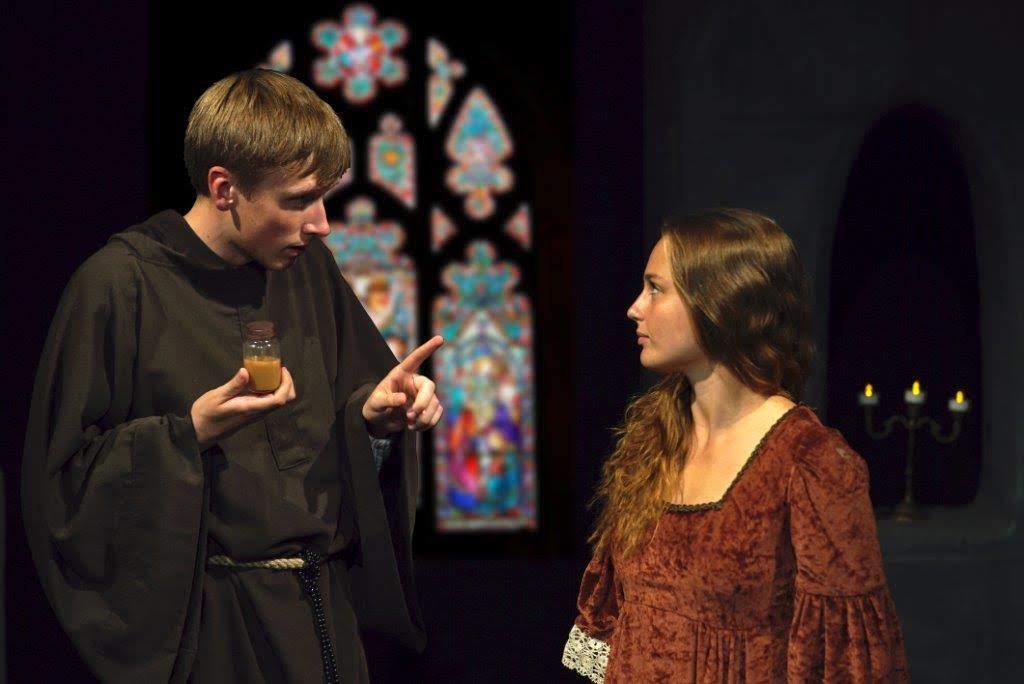 “Today we watched the play Romeo and Juliet performed by the British Heartbreak Productions at  Wuxi Performing Arts Theater.

More than 400 years have passed since Shakespeare’s play “Romeo and Juliet” was written,

speech and living habits have changed dramatically since then and this can sometimes make it hard for modern audiences to connect with a Shakespeare performance.

However, because it is a classic play,  people are still interested in seeing it, therefore, it is great to see a version that remains faithful to the original’s spirit while being adapted to contemporary taste and understanding.

Heartbreak Productions has kept the main themes intact but streamlined the appearance of fringe characters including Rosalan, Earl Paris, Lady Capulet, Father Lawrence and other minor characters. They have also deleted most 14 lines sonnets and many other non-rhyme poems in the original play. Instead, they let the characters express this material through plain English.

Such adaptation of course means less authenticity but helps to give the non experienced Shakespear audience a fuller comprehension of these characters motives and actions, as it helps audience members, who have no background knowledge of English literature immerse themselves in the classic storytelling and enjoy the charms of a dramatic performance without the extra barrier of the archaic language.

The simplified lines and plot provide the actors with a relatively easier performing burden and they appear very relaxed and confident on stage while delivering a very focused and committed performance. It can be seen that the production is very well-rehearsed and this has provided the actors with plenty of confidence and flexibility to show off their acting skills freely. 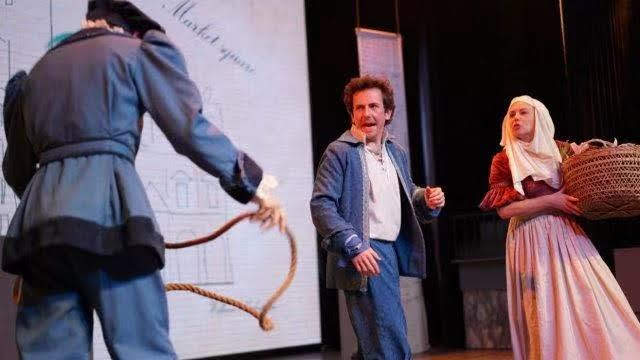 When the show started, I didn’t pay much attention to the actors’ acting skills focusing instead on the story and novel delivery. It wasn’t until the scene of the dance party where Romeo and Juliet first met that I suddenly noticed the brilliance and subtlety of the performance; for example in Juliet’s act: When she was dancing with someone else, she kept turning around spying on Romeo, demonstrating the kind of ingenuity and innocence of a young girl at the first awakening of love. It was very well judged and reminded me of Natalie Portman performance.

The fight scenes are also very real and intense. The scene of the market fight spoke of numerous hours of hard rehearsal.  At the point of the fighting climax,  my daughter closed her eyes in fear, and I was very worried about the safety of the actors because the swords in their hands are real metal. Although they don’t have sharp edges, it would still hurt immensely if an accidental hit were to occur.

In the scene of chasing Romeo, Capulet’s soldiers were searching and chasing him on and off the stage, and the synchronisation between actors was immaculate, showing that they had done their homework well prior to the show, in what must have been an unfamiliar venue.

In addition to the actors’ acting skills, the stage design is also quite striking.  At first glance, the props seem very simple: a few grey boxes scattered here and there,  a simple balcony model hidden in the corner… Then as the show progresses, we learn that these boxes can be put together in all kinds of ingenious combinations to simulate a multitude of things; such as tables, beds, or a stone platform, etc…. I was impressed, it was very imaginative and practical, ideal for a travelling troupe. The backdrop was projected with sketches like a market, a building with a balcony, Juliet’s bedroom interior, balcony scene…etc…it was stylishly done and was fresh and interesting to our eyes.

The adaptation of this play presents a more humorous take than the typical Romeo and Juliet, while still retaining the essence of the great tragedy. For example, in the market, when Juliet’s nurse came to meet Romeo, Mercutio put a rope between his legs in a suggestive manner; or the scene in Juliet’s bedroom, where the nanny raised her skirt, these  bawdy actions produced a laugh  from the adults present without  overdoing it, or moving into pantomime.  This show has given the children of our performing arts school a very enjoyable and rare opportunity to taste a Shakespear play in English and I am sure this has planted a seed in their young hearts.  In time I’m sure this seed will grow into a huge tree, expressing their love and appreciation for the best in theatre and drama.