Chinese acrobats’ Swan Lake is the logical next step.

There was always a whiff of the circus about 19th-century ballet, with its exotic dancers, spectacular transformation scenes and novelty dance steps, so it is arguable that the Chinese acrobats’ Swan Lake is the logical next step. Back in 1895, Petipa gave his Odette/Odile 32 fouettées to dance because audiences clamoured to see this ballerina feet at every show. Why shouldn’t Sun Jiayin show off her own extreme equivalent – dancing on point on Siegfried’s head? 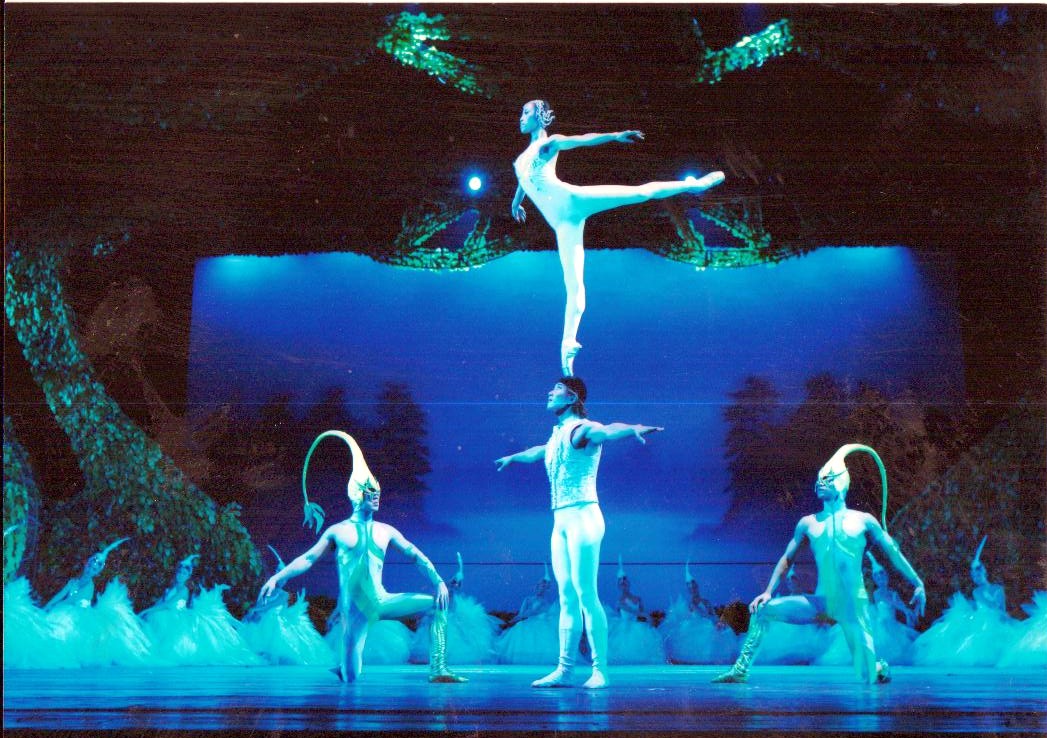 Only the stingiest of purists could fail to be enthralled by what these acrobat-dancers do. The Tchaikovsky score might be crudely recorded and the action might bear scant relationship to the original libretto, but there is magic on stage. As Siegfried sets out in pursuit of Odette (a world tour rather than a simple trip to the lake), he encounters hat-juggling South Americans, sailors who fly from one quivering ship’s mast to the next, carnival stilt-walkers, and a quartet of frogs who dance on their hands. Trapped by the wicked Eagle King, he is bedazzled by contortionists who undulate like caterpillars and lovers who dance on unicycles.

At their most awesome, these tricks are integrated completely into the stage action – juggling in exact time to Tchaikovsky proves to be a marvel. Some acts do, however, feel shoehorned into the concept. Roller-skating swans are infinitely less impressive than their ballet equivalent, and the clowning cygnets should be dropped. It is also a shame that the production engages so little with the story, with the Prince a solid cypher of a hero and Odette, in all her marvellous, bendy boldness, no tragic heroine. But, finally, who cares? These performers reset human limits. As Odette perches high on Siegfried’s head, her body arched in a back-bending arabesque, every demurral is drowned by the collective intake of breath.

The Guangdong Acrobatic Troupe’s Swan Lake is phenomenal and cheesy, sometimes both in the same breath. On the one hand, you get blurry storytelling, tacky effects and a corps de ballet on roller skates. On the other, you get performers doing the impossible – most spectacularly, that scene where the heroine dances, on pointe, on top of Wei Baohua’s head. Once balanced, Wu Zhengdan kicks her other foot into a high extension. And then she does a backbend, her head level with her supporting ankle. The audience reacts with awed disbelief.

Based in Shanghai, the troupe has won awards around the globe. Unsurprisingly, Swan Lake is the company’s most celebrated production. The whole show was built around that duet, created in 2004 as Oriental Swan-Ballet on Top of Head.

Yet this production is at its weakest when it tries to be balletic. Contortionist bodies have no trouble getting into ballet poses, but as dancing it lacks authority and expression. Tchaikovsky’s music has saved countless versions of the ballet, but this taped version rarely fits the acrobatic action.

Though choreographer Zhao Ming builds conjuring, flying effects and transformations into the story, his staging is clunky. The tricks are there, but with little wonder in them. Zhang Jiwen’s elaborate designs can obscure acrobatic detail. The first half flags, weighed down by clown acts and bad pacing.

Occasionally the sheer flashiness becomes charming. In search of his beloved, the Prince sails through Egypt on a stuffed camel, passing a stageful of tinsel-clad belly-dancers.

Though characterisations are generally thin, Wei Baohua takes it all very seriously. He goes on registering devotion, no matter how many unicyclists and jugglers they throw at him.

The acrobatics are astonishing, even if you have to sit through the story to get to them. As a Snake, Tan Wanxia wound herself into positions I could hardly bear to look at. One juggler whirls seven or eight sparkly clubs, kicking them up from the floor while keeping the others spinning. In the evening’s best use of music, the cygnets are replaced by four frogs, who hop about on their hands, kicking their legs neatly to the beat.