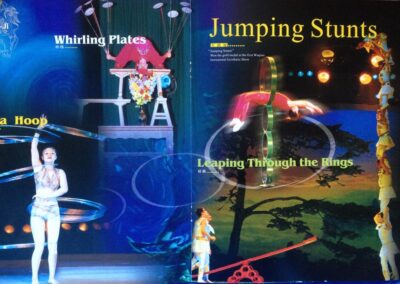 Quite a change of pace for the Grand , this extraordinary show from one of China’s foremost acrobatic troupes proved to be a hugely compelling and entertaining offering. The Anhui Acrobatic Troupe, currently engaged in an extensive tour of the UK, specialises in routines which defy the laws of gravity and physics: the end result is a spectacular mixture of aerial acrobatics and supreme athleticism which is rarely seen these days, either on stage or screen.

Small wonder that this production attracted such a large and appreciative audience – to see adults and children alike so enthralled by the skills of these performers was heartening, and the overall mood of the show was both energising and positive.

These performers, whether balanced atop a precarious stack of wooden chairs or perched halfway up a vertical pole, proved that they were capable of almost anything， strength and agility were the hallmarks of this tremendously enjoyable show in which the multi-talented members of the company stretched their bodies to the limit and emerged triumphantly. This was far more than the usual display of circus skills served up by European athletic troupes: the agenda here was clearly more constructive and positive, aiming to build bridges between East and West – and no-one could have failed to be impressed by the skill and dedication of those involved. 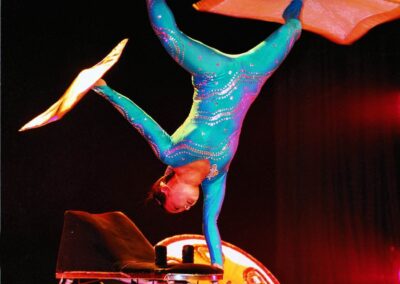 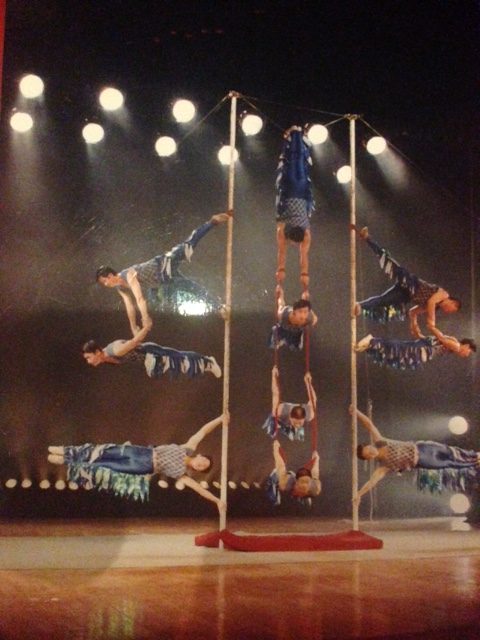 A Feast of Feats by End Theatre Critic  Stewart Sweeney:

This is a delightful show and the primary reason is the brilliance of the artists as they balance and spin in a series of remarkable acts. Overall the women impress more than the men, showing that precision and elegance score more highly than sheer power and maybe that is why London’s dance critics were out in force for the press night.

The other enjoyable aspect of the evening is a certain naivety in the presentation: a spectacular balancing act is called ‘Ladies and their chairs’ and another, ‘Artistic Poses’; there is more irrelevant smoke and dry ice than has ever been seen on the London stage; the costumes are a fright, especially some short lumpy tutus paired with off-the-shoulder fake leopard skin tops; the choreography is ‘limited’ and includes a wonderful moment for the men when they must stretch out one arm with the other on the back of their heads.

But amidst all this kitsch lie the gems of the various acts. Those ‘Ladies and their chairs’ are amazing – 7 ladies and 10 chairs, arching up and off centre. The most difficult, but underplayed moments of this balancing act occur when a new girl is added to the construction and the others all have to make simultaneous adjustments to maintain the centre of gravity over the central chair. And then at the end, they each do a hand-stand from this precarious position. The audience erupted with applause.

Another act features a solo woman lying on her back and doing clever balances with parasols. And then to make life more difficult she performs similar tricks with sheets of cloth, which have to be spun at a terrific rate to make them behave like solid surfaces. At one stage an organiser comes out and explains that there is always a 1% chance that a trick will go wrong. Then in one, not apparently overly difficult act, a performer fails two times to make it work. An accident or a marker that even these adepts are fallible?

For a finale, four men stand one on top of another and a powerful small woman is propelled from a see-saw with a back-flip to land on the shoulders of the fourth man, some 20′ high.

One disappointment is that the programme provided neither the names of the talented performers, nor those who have trained them. I suspect that it is the culture of the ensemble, rather than individualism that lies behind this. 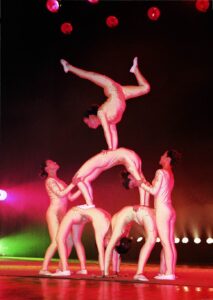 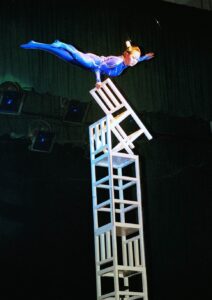 It has taken me more than a decade to come to terms with this article written by Donald Hutera, who was a freelance dance critic at that time. It went back a number of years when this Anhui Chinese Acrobatic show staged in London.  It was overwhelmed by theatre venues looking to host the show, and soon I had lined up twenty-four venues for a full UK tour. The show was extremely well-received, many positive reports poured out, apart from this one, what I can only describe as “very ugly” review which appeared in The Times.

Well, I would like to keep this ugly article as it is here as a record to display how old English generation turned their nose up at Chinese doing and this type of ” spine distortion’ ‘weird skills,’ ’ in comparison to the highminded refined culture of England….  this review may be very much a product of its time.

Chinese acrobatics demonstrate astonishing feets, and most acts are people taking risks doing the impossible, versus failure odds in classic fashion.  This old dance critic seemed gobsmacked by the show and lost his proper words, this was not a dance show, even not any show that he had seen before, he mentally rejected it and chose many mean words to describe it. Cirque du Soleil came to the UK a few years later to a hugely different reception. By then, I am sure that he would be shamed about this article he wrote and the unjustified disdain he spilled.

Despite the presence of chairs in several routines, the last thing that the 30-plus members of China’s Anhui Acrobatics are allowed to do is sit down. In Za-Ji, an alarmingly fit and ever-smiling young cast tries just about everything else within the realm of physical possibility. Directed by Jianping Zhu, the show is a sometimes outrageously entertaining blend of kitsch production values and gob-smacking stunts.Opening night began unprepossessingly with a theatrically flat, cumbersome two-person aerial ballet based on the tragic myth of a Chinese Romeo and Juliet reincarnated as butterflies. But subsequently the string of acts grew in term of thrills and weird skills.

A clutch of strong, wiry women struck what the programme billed as ‘artistic poses’ – cantilevered balances and pretzel-like conglomerations of skin and bone. In a spine and mind-bending display of contortion, a soloist twisted like taffy while balancing pretty little tiers of plastic cups via feet, forehead and mouth.Raised up on a revolving platform, she could have been a human fountain only minus the water.

Perched atop a stack of six chairs, a compact woman executed single hand-stands with imperturbable confidence and zen-like concentration. Her rock-solid moves were punctuated with sexy little twitches of the midriff. A more obviously fetching girl worked an audience ranging from kids to pensioners into a collective frenzy, simply by inserting herself inside a battery of silver hula hoops. The centrepiece of the daintiest-seeming act lay on her back, gracefully tumbling large parasols with slippered feet. She then switched to simultaneously spinning fabric with all four limbs and, thanks to a short stick held between the teeth, head.

By contrast the boys of Anhui were boundingly athletic, whether vaulting and somersaulting through stationary rings or shooting up, down and between tall, vertical poles. One made his ascent using only his muscular arms, while the lot of them stretched out parallel to the floor straight as ram-rods in gravity-defying group tableaux.

Originally found in 1956, the current Anhui ensemble is plainly stunningly well-trained. Inevitably, however, there is the risk of failure. Witness a plate-spinning section attended by a caterwauling, tiara-wearing vocalist who smacked of Las Vegas. Here the girls simpered nicely, at least until one attempted a single handstand on another’s hand. As the grimaces of the girl on bottom made painfully clear, the trick wasn’t working. Her few moments of ill-concealed shame afterward were a poignant example of what a dedicated, emotionally transparent company this is.