Quite a change of pace for the Grand in the wake of the premiere of Under Milk Wood, this extraordinary show from one of China’s foremost acrobatic troupes proved to be a hugely compelling and entertaining offering.

The Anhui Acrobatic Troupe, currently engaged in an extensive tour of the UK, specialises in routines which defy the laws of gravity and physics: the end result is a spectacular mixture of aerial acrobatics and supreme athleticism which is rarely seen these days, either on stage or screen.

Small wonder that this production attracted such a large and appreciative audience – to see adults and children alike so enthralled by the skills of these performers was heartening, and the overall mood of the show was both energising and positive. 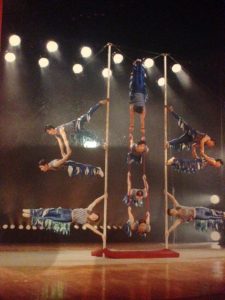 These performers, whether balanced atop a precarious stack of wooden chairs or perched halfway up a vertical pole, proved that they were capable of almost anything: strength and agility were the hallmarks of this tremendously enjoyable show in which
the multi-talented members of the company stretched their bodies to the limit and emerged triumphantly. This was far more than the usual display of circus skills served up by European athletic troupes: the agenda here was clearly more
constructive and positive, aiming to build bridges between East and West – and no-one could have failed to be impressed by the skill and dedication of those involved.