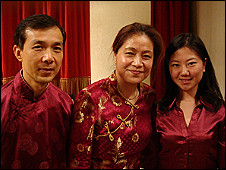 A poignant and evocative musical experience. Imagine the crowded bank of the Thames river with the grand Parliament building and London’s Big Ben as a backdrop. Add to this a spicy taste of a traditional Chinese Spring Festival and a splash of Oriental colour.

To me it was like being swept back to my childhood, in my traditional Chinese home village, immersed in the crowded festival atmosphere with coloured lanterns flashing in front of my eyes and the sound of music played by these beautiful instruments filling my ears, the excitement stayed with me for days. 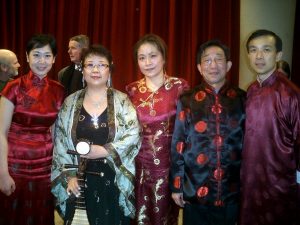 It’s the third day of the Tiger year celebration, my colleague and I were lucky to be there to have a celebratory ‘taste of home’. A real pleasure, as due to working in London it’s not easy to get back for a traditional new year.

As I sit down I look around the audience and see a large crowd made up of a typical cross section of the London population, all ages and races.

An English senior couple sit beside me and smile. They whispered to me: We are coming to join the celebration of the tiger year”.  Just like the London Mayor Boris Johnson who referred to the words “Lucky Tiger Year”，” auspicious” and “prosperous” in his speech to Chinese media; westerners are increasingly interested in Chinese culture and the Tiger and Dragon symbols.

I had a chance to meet the renowned flute musician Dong qiu-ming and Guzheng master Zhu Xiao-meng, they both came from the Shanghai Conservatory of Music. They told me that westerners have a good ear for music and that they are always moved by the beauty of Chinese melodies.

The concert started with one of my favourite pieces the magnificent composition, Butterfly Lovers. The whole audience were totally immersed in the astonishing and masterful play of the five musicians on stage. Their coordination and combination of the different traditional instruments were just perfect.

Musician Dong Qiu-ming is rated as one of the top three flute players in Shanghai. His repertoire including “The Air of Qin River” exhibited the passionate character and earthy joy of the West-Northern China ethnic group and was a fine example of virtuoso playing. Musician Chen Da-cai, a professor of the Erhu instrument in the Shanghai Conservatory of Music, demonstrated “Reflection of the Moon in the Pond”, which was composed by the musical genius Ar Bin, one of the most acclaimed pieces in the world music library. Chen Da-chen’s rendition was beautiful.

In total seventeen fantastic Chinese pieces were performed ending with the haunting melody “Coloured Clouds Run After the Moon”, The applause was repeated and repeated, the audience stood up. Their cheerful sound and faces leaving no doubt of a popular and successful concert. Watching these expressive faces filled with appreciation and gratitude, made me glad to be a part of it. It was such an exciting and moving moment for everyone.

St. John’s Smith Square, the music concert hall attracted a large group of British music experts and critics, The Brazilian composer Nicolaiewsky from Porto Alegre, was very excited after seeing the concert. He said that it was his first time experiencing Chinese music live. He was so impressed he decided he will be choosing some Chinese music for his new film. I recommended that he select the piece “Spring River Blossom Moon Night” which has been my favourite since I was a child when I spent many hours practising it on my own Pipa instrument.

There were Chinese faces in attendance, some of them looked as though they had been away from home for a long time including a number of students. It’s my guess they would have had similar feelings to me. It was a very special feeling to have such an eminently Chinese cultural event so well received in a western country especially for this Chinese festival season. It was a rare joy to see such a high standard Chinese Classical Music Concert in the West End.
Once the concert was over I had a chance to talk to the musician Dong Qiu-ming and Zhu Xiao-meng among the excited crowds, they said their performances in western countries have always been very well received, and they were normally overwhelmed by the response, which made them think they need to do more work in the west to meet the demand.

The organiser and the concert director Ms Liu Li expressed the opinion that China possesses some of the richest forms of performing arts in the world and many world class performers, and suggested that Chinese cultural exchange with the rest of the world will be fruitful for many years to come. She also says the exchange is two-way, Chinese people currently go to western concerts more than Chinese ones, Chinese people are eager learners.

I remember there was an article about Chinese folk music a short while ago. It discussed a young generation of Chinese musicians more enthusiastic about learning western instruments than traditional Chinese instruments. It raised the declining interest in classical forms as more people favour pop music and expressed doubts about where the future of Chinese folk classical music lies?

From what I saw in tonight’s concert, I believe the greatest era for the appreciation of Chinese Music is yet to come. In the West and in fact all around the world, there is an increasing desire to know China for her oriental nature as well as her ancient heritage. Concerts like this one make my case, the cheers, applause and whistling all around me convince me I’m right.

< Back to Concert page | < Back to Media Reviews