China is famous for its china-porcelain wares and was highly acclaimed and sought after. For the past few centuries, it has been exporting porcelain wares to many countries. In China, porcelain enjoys a very long history. During the Shang and Zhou dynasties, ancient earthen wares were found in the middle and lower reaches of the Yangtze River and Yellow River. Actual porcelain wares only starts during the Han Dynasty. As times progress, the making of porcelain ware improves with new techniques and creativities, resulting in having different styles from one period to another period.

During the Han Dynasty, celadon and black porcelain were mainly produced. Celadon is a type of grayish-green glaze, which is like the colour of jade. Developments in the productions of celadon porcelain continue to carry on into the later dynasties.

In the late Tang Dynasty, with the achievement of high technical method, celadon porcelain was produced in a large scale. While celadon porcelain was at its peak, at the same time, pure white porcelain known as Xing ware, because it was mainly produced at Xing Kiln in the Province of Hubei. Its porcelain wares when been tapped gives out sounds like as if a sound from a musical instrument. 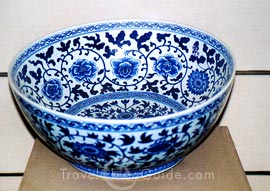 In the history of Chinese porcelain, the porcelain wares of the Song Dynasty can be classified as a classic example of porcelain art in the entire world. Classic, because Song porcelains have achieved an excellent combination of shape, glaze and decoration to it’s ware. This is mainly due to the achievement made by the potters during the Song Dynasty, for having acquired a high command of skill in the area of making pots, innovative firing techniques and glaze making.

Many famous kilns were found at different areas during the Song Dynasty. Among all the famous kilns, the Ru Kiln, Jun Kiln, Guan Kiln, Ge Kiln and the Ding Kiln are the top five most famous kilns.

It was said that a Ru ware are solely produced for the imperial court. Ru wares is fine and delicate, it uses a special glaze with carnelian added to it. Basically, four kinds of colour glaze are been used in Ru wares; they are azure, sapphire, moon white and turquoise. The firing temperature and the glaze prescription are very difficult to control. With only twenty years of production, Ru wares are very rare. So rare, that up to date only seventy pieces of such ware can be found in the whole world. Therefore, we can say that the techniques applied in the production of porcelain wares during the Song Dynasty have reached its greatest height.

During the Yuan Dynasty, the porcelain industry continued with its rapid development. Blue and white porcelain of the Tang and Song dynasties, continues into the Yuan Dynasty, by using the traditional techniques maybe with some difference in design like painting are being applied.

Firstly, the blue and white porcelain ware was painted with a strong blue under the transparent glaze. This resulted in the colour been perfectly protected by the layer of hard glaze, enabling it to be lasting and well preserved. Among those kilns at that time, the kilns in Jingdezhen has made a technical breakthrough by remodeling the material combination and make improvement to the firing temperature, hence facilitated the production of large porcelain wares.

Thirdly, before the Yuan Dynasty there was very little colour choice. Great achievement was made in the produce of coloured glaze.

In the Qing Dynasty, the blue and white porcelain made great advances and created a worldwide interest. Among the Qing porcelain wares, those produced under the reigns of Emperor Kangxi, Yongzheng and Qianlong are the most famous.