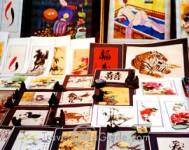 Chinese painting is one of the traditional Classical arts in China.  Painting is done using a brush on paper or silk, often with black ink alone. It is often a monochromatic work of art derived, perhaps, from calligraphy if not monochrome it tends to subtle colour variations. A Chinese painting is a distinctive object based on centuries-old traditions common to many things in China.

The roots of Chinese painting can be traced back to Chinese Neolithic pottery. Chinese painting was closely related to crafts like pottery as observed in the decorations used on decorative bronzes, carved jade and lacquer ware such as figures of fish, frogs, deer, birds, flowers, tree leaves and dancing people which dates back to around 6,000 to 7,000 years old. Paintings were mainly painted on silk or walls before the Tang Dynasty, and mural paintings were particularly popular. The earliest Chinese characters were pictographs.

Classical Chinese painting can be divided into three categories: landscapes, figures and birds-and-flowers. Throughout the course of Chinese painting, images of emperors, philosophers, and court ladies provide role models from the past; landscapes and bird-and-flower paintings demonstrate the central place of nature in Chinese thought. Religious paintings reflect both the Daoist philosophy native to China and Buddhism.

The range of themes depicted in figure painting was extended far beyond religious ideas during the Song Dynasty (960-1127 AD). The art of figure painting during the T’ang Dynasty (618-906 AD) was considered the golden age of figure painting. Historical subjects and scenes of courtly life were popular, and the human figure was portrayed with a robustness and monumentality unequalled in Chinese painting. Paintings of historical character and stories of everyday life became extremely popular. Also, techniques were further refined.

Landscape painting had already established an independent form of expression by the 4th century. It gradually developed into the two separate styles mainly “blue-and-green” and “ink-and-wash” landscapes. The blue-and-green landscape used bright blue, green and red pigments derived from minerals to create a richly decorative style. The ink-and-wash landscape relied on vivid brushwork with varying degrees of intensity of ink to express the artist’s conception of nature, his own emotions and individuality.

Flower-and-bird painting was separated from decorative art to form an independent genre around the 9th century. Many well-known artists painted in this genre during the Song Dynasty and their themes included a rich variety of flowers, fruits, insects and fish. Many of the scholarly painters working with ink and brush used a great economy of line. They produced paintings illustrating things such as plum blossoms, orchids, bamboo, chrysanthemums, pines and cypresses which reflect their own ideals and character.